Sidney Poitier and The Civil Rights Movement in Hollywood

This post is written in conjunction with the Summer Under the Stars Blogathon hosted by Sittin' on a Backyard Fence and ScribeHard on Film. A full day of Sidney Poitier films will air on TCM on August 7. 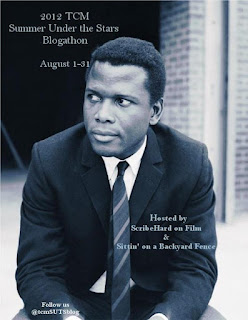 From the time Sidney Poitier first stepped in front of the camera in 1950, he drastically altered the racial paradigm of Hollywood films. Poitier came to represent the changes implemented by the Civil Rights movement. As an actor, Poitier’s role in the Civil Rights movement was to “desegregate the entire cultural statement of America” (Goudsouzian). Poitier was one of the first black actors to pull away from the stereotypical roles of black actors at the time, roles of servants, comedians, and singers. He also gave dignity and humanity to all of his characters, thereby shifting the potentials of black actors in Hollywood while also providing white audiences with a more accurate image of African Americans. Sidney Poitier is an example of the legitimacy the Civil Rights movement gave African American actors in Hollywood.


Poitier’s background gives insight into the uniqueness of the actor who was able to change the face of black performance in Hollywood. Poitier was born prematurely in 1927 Miami to a tomato farmer from Cat Island in the Bahamas. Expecting his three-pound son to die, his father bought a miniature casket to bury him in. Poitier grew up in poverty on Cat Island. At the age of 15 he moved to Miami to live with an older brother, and at 17 he moved to New York. After a few years in the army during WWII, he took a series of menial dishwashing jobs before deciding to go into theatre. Poitier’s Hollywood film debut, NO WAY OUT (1950), saw him in the role of a young doctor, already breaking racial stereotypes.

Many scholars accredit Poitier’s sense of dignity to his upbringing in a primarily black environment on Cat Island – “Colonialism aside, growing up in a black majority country meant that most of the doctors, nurses, lawyers, and policemen he encountered were black” (Goudsouzian). Poitier once said of himself and fellow actor and friend Harry Belafonte:

“I firmly believe that we both had the opportunity to arrive at the formation of a sense of ourselves without having it f------ with by racism as it existed in the United States." (Gates)

Poitier said that the difference between life on Cat Island and in the southern United States was very difficult for him to overcome. Of his poor life in the Bahamas he said:

“I have always had great pride. My parents taught me I was as good as anyone. In the Caribbean, a young Negro is never robbed of his pride.” (Marill)

However, when he moved to Miami with his brother, he was always getting into trouble:

“Now the [color] line was all over the place like barbed wire, and I kept running into it and lacerating myself.” (Gates)

It is clear that Poitier’s mental distance from the degrading effects of segregation helped him in many ways. In the first place, he was able to recognize the injustices of the oppressive system. Because he had seen black people in the Caribbean in all lines of work, from manual labor up to white-collar, he did not need more evidence to prove to himself the fact that the African American man was as capable as any white man. Poitier was thus able to maintain a personal sense of dignity.
Film roles for African Americans in Hollywood had always been very limited. A number of black performers had gained notoriety, but their roles did not necessarily reflect either the realities of African American life or the potentials of African Americans as actors. As American sociologist, poet, and writer Calvin Hernton observed of African American performers when he was young:

"Despite their great singing and dancing and cooing, and definitely despite their prettiness, they did not strike me as being as real in what they were doing as, say, the Negroes I had passed that evening on the street. Although I had enjoyed what I had seen, I was left a little confused. In fact, that's what most of them were, entertainers. In too many instances, it was the negation of the Negro's very humanity in terms of the authentic portrayal of his personality as an entire integrity rather than a factionary dysfunction. I had begun to grow fearful that perhaps Negroes really did lack the capacity for dramatic portrayal." (Hernton, 2003)

The few African American actors who were able to achieve any level of notoriety often did so by actually perpetuating white audiences’ perceptions of African Americans. As film historian Charlene Regester points out, during the 1930s, “black actresses began to gain prominence as the screen companion to (the shadow of) these white actresses; among them were Louise Beavers, Hattie McDaniel, and Fredi Washington.” Regester also observes how the black press reacted to such actresses, “praising them for the performance and castigating them for the images their characters projected.” In the case of Hattie McDaniel, perhaps the most popular and well-known actress of this group, her continuous portrayal of the Mammy character pushed the performer and the character in two separate directions. On the one hand, McDaniel was gaining respect as an actor by “her transformation of the subservient (subordinate, dehumanized, and devalued) into the dominant (defiant and directing)” in her portrayals of a limiting role. On the other hand, her on-screen roles were seen as being “inextricably linked with persecution, victimization, marginalization, and exploitation.”
One can imagine, therefore, what a breath of fresh air young Sidney Poitier must have seemed as “the film industry's living embodiment of the progress generated by the civil rights movement” (Gates). Poitier’s upright portrayals of honest African American manhood were a far cry from the subservient “Mammy” roles of previous decades. He was able to prove to the American movie-going public not only that African American men could act, but that they could also think and feel with as much dignity as any white man. He also paved the way for future generation of African American actors by reversing stereotypes and allowing for alternative portrayals of African American life.
Sidney Poitier was very closely associated with the Civil Rights movement. Poitier’s first wife Juanita made their Pleasantville estate a meeting place for Civil Rights leaders, becoming hostess to such personalities as Ruby Dee, Clarence Jones, Ossie Davis, John Oliver Killins, and Malcolm X. In 1964, Harry Belafonte convinced a hesitant Poitier to travel with him to the south for Freedom Summer to help to boost the morale of the volunteers. The trip “solidified Poitier’s commitment to SNCC,” and he would become the symbol of the group’s goals for African Americans. Juanita found a five-foot burning cross in their drive after Poitier had marched in honor of James Meredith, who had been shot in 1966. When a hesitant Sammy Davis, Jr. joined Poitier in a march at Tougaloo College, he said “Harry and Sidney... were like two black knights” who made him feel safer in the deep south (Goudsouzian).


"Poitier’s rhetoric balanced between progressive politics and public appeal. He recognized his position as a spokesman and fundraiser, which suited his philosophical, nonconfrontational nature. He thus typically refrained from overt activism." (Goudsouzian)

Poitier’s one insecurity might have been that he wished to constantly satisfy everyone. When Civil Rights activists like Belafonte pushed him to use his work to become more militantly involved in the movement, Poitier resisted. In Hollywood, Poitier had to fight hard to obtain roles which did justice to his self-worth as an African American man. He accepted roles that Belafonte had turned down, even controversial types that many black actors had refused, like PORGY AND BESS (1959). On the other hand, he himself turned down roles which white Hollywood had always assumed represented the pinnacle of any black actor’s career, like OTHELLO. Poitier himself once said:

“what I want is the kind of role that makes me feel worth-while. I will work anywhere, movies, theatre, and TV, provided the material has texture, quality – something good to say about life” (Rollins). 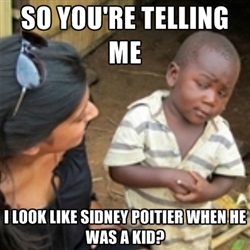 In another post, I will discuss Poitier’s films and how they pushed for change by refusing to satisfy the warped Hollywood ideal of race relations. Stay tuned!