This post is written in conjunction with the second annual Queer Film Blogathon hosted by Garbo Laughs and Pussy Goes Grrrr! The first film that came to mind for me when I signed up to participate in this blogathon (my first, as it happens!) was George Cukor's SYLVIA SCARLETT (1935), the first film of four to pair the great acting talents of Katharine Hepburn and Cary Grant.

The idea to make a film of SYLVIA SCARLETT was entirely the brainchild of Katharine Hepburn and her director friend George Cukor (who was himself, by all accounts, homosexual). He called it "our love child" and she called it "our flopperoo." Hepburn invested some of her own money into the project:

"I sank some of my own money into SYLVIA SCARLETT. 'Sank' is the right word. I could have dropped it into the ocean with bricks tied to it and had a better chance of seeing it again" (Chandler 93).

"I always kept a little foolish money on the side. Foolish money is money I thought I could afford to be foolish with. It wasn't the money that was foolish. It was I" (Ibid., 94).

The preview showing of SYLVIA SCARLETT was a legendary catastrophe. Hepburn sat next to costar Natalie Paley (who plays her romantic rival) and they couldn't figure out why the audience weren't laughing at the funnier scenes. At one point during the movie, audiences stared to leave. Afterwards Cukor and Hepburn went up to producer Pandro Berman (who never wanted to make the picture in the first place) and told him they'd make another movie for him for nothing. He said he never wanted to see either of them ever again (he would - they made a lot more pictures together both at RKO and MGM).

However badly SYLVIA SCARLETT did at the box office, Hepburn herself received some fairly positive notices (Edwards, 145):

"The dynamic Miss Hepburn is the handsomest boy of the season. I don't care for SYLVIA SCARLETT a bit, but I do think Miss Hepburn is much better in it than she was as the small-town wallflower in ALICE ADAMS" (New York Harold Tribune).

"SYLVIA SCARLETT reveals the interesting fact that Katharine Hepburn is better looking as a boy than a woman" (Time). 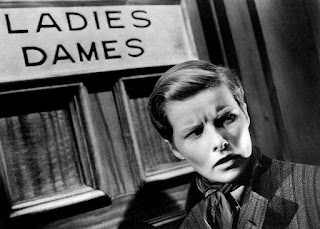 SYLVIA SCARLETT is a film nested in multiple layers of doubles and contradictions. First of all, the subject matter contains themes of gender ambiguity which are paired off in doubles, the most prominent of which is that Sylvia/Sylvester is a girl masquerading as a boy. There is also the dual nationality aspect of the film which places the Hepburn character in particular in a sort of no man's land of identity. The film itself failed to win over audiences because it was simultaneously too safe yet too risqué. The result is altogether too ambiguous.

SYLVIA SCARLETT is about a girl and her father, Henry (Edmund Gwenn), who are forced to flee France because he has been fiddling with the accounts. In an attempt to deceive the authorities, Sylvia cuts off all her hair and disguises herself as a boy. On the boat to England, she/he and her father meet Monkey (Cary Grant), an English con-artist with whom they join forces. The group is joined by a cockney housemaid named Maudie, who becomes Henry’s new wife, and the troupe goes to the English seaside as a traveling band of performers. It is there they meet local Bohemian artist Michael Fane (Brian Aherne). Sylvia immediately falls for him and he himself gets a "queer feeling" whenever he looks at the boy.

The Hepburn character is confronted with a struggle that often accompanies "doubles roles," roles in which the character switches between two identities. This is especially true in this case if we examine Sylvia/Sylvester's relationship with the father figure. The opening sequence in the movie (which was tacked on at the last minute in an attempt to justify Sylvia's radical transformation into Sylvester) explains to the audience how the Hepburn character both adopts yet resists the dead mother's position in relation to the father. On the one hand, she insists on remaining "faithful" to the father by refusing to marry. But on the other hand, she rejects femininity by refusing to be "weak and silly." It is this strange attempt to negotiate the incompatible that renders this film literally in-credible. 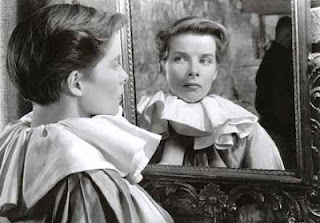 A certain theatrical thread runs through this movie, tying together various themes of oppositional identity. It is a radical film in the sense that it defines femininity as an act and gender as a matter of style. At the point in the film when Sylvester reverts back to Sylvia, another character asks an extremely significant question: "Which is which?" That is the real question mark of the entire film! The sexual ambiguity of the Hepburn character becomes more evident as Sylvia and Michael attempt to negotiate the definitions of gender identity. As the film progresses, we forget which of Sylvia/Sylvester's genders is an act and which is her true nature. Without a doubt, Hepburn is much more convincing as a boy than as a girl and this is very apparent in her romantic scenes, which have a tendency to work against her credibility: the more feminine and girly she behaves, the less valid her performance becomes.

Sylvia/Sylvester's relationship between the other female characters of the film is also worth taking a closer look at. As in two other notably popular LGBT films, QUEEN CHRISTINA (1933) and MOROCCO (1930), SYLVIA SCARLETT does contain a lesbian kiss. This is one of those moments when the film could have been more ambitious but chose to err on the side of caution by having the Hepburn character reject a kiss from another woman - another woman who, incidentally, believed she was kissing a man in the first place. It's an odd scene which serves little purpose but to highlight the gender trap which the Hepburn character has set for herself. She cannot devote herself to true masculinity nor true femininity unless she wants to cross the line from the hetero- to the homo-sexual.

Sylvia also has an odd relationship to the woman who would be her romantic rival for Michael. Although Lily is catty and jealous, Sylvia refuses to reciprocate those disgustingly traditional female stereotypes. Instead she ideologically allies with Lily and in fact saves her life in order to allow her to be with the man she, Sylvia, loves (this sort of female allegiance can also be found in HOLIDAY (1938), another Hepburn/Grant film). When Monkley questions her devotion to her female rival, she rejects his cynical view of life and says, "She was willing to die for him. That must count for something" and "It might be a pig of a world for you and me, but not for her, if I can help it." Then when she goes to bring Michael back to Lily, she explains, "You mustn't let her be [this unhappy]."

When the film places Hepburn back into male costume toward the end of the film, at a point when every other character knows she is a woman, and as she continues to take the part of ally rather than rival to the other female characters, her status as "another one of the guys" is solidified. She and her would-be lover are shown as either homosexual man and man or heterosexual/asexual man and man. It isn't until circumstances force them to chose is the issue somewhat resolved. Even then, the resolution is incomplete, because we are unsure whether they will prefer to continue are rather confused gender charade with Sylvia as Sylvester, or if we can assume that at some point she will attempt to revert to complete femininity (a feat we doubt she can actually achieve anyway).

Although the film fails to come to any definite conclusions about gender and sexuality, it does follow through on many of the issues about gender which are present in many of Katharine Hepburn's other film roles. Like many of her other more radically feminist film, it directly addresses the question of gender identity, even if it does confuse the matter more than clarify it. I find it an immensely humorous film - Cary Grant is really at the top of his game as a performer, even is her does have a more minor part. He really shines as the cockney acrobatic circus performer. Remember that it's in another Hepburn/Grant film that he becomes the first character ever to use the term "gay" for its homosexual connotations (in BRINGING UP BABY (1938)). I encourage you to see SYLVIA SCARLETT and enjoy it, both as a fun comedy, and as an examination of the representation of LGBT themes in classic Hollywood films.