"GIGI" is the shortest title of any movie to have won the Academy Award for best picture. The day after the film won nine Oscars at the 1959 Academy Awards, telephone operators at the studio answered the phones with a cheery "M-Gigi-M!" The original story was written by Colette and was adapted for the stage by Anita Loos. The Broadway production starred Audrey Hepburn in the title role and ran for 219 performances between November 1950 and May 1952. Unfortunately, Hepburn was not available to do the film due to other commitments, so the role went to French native Leslie Caron. Her two co-stars, Maurice Chevalier and Louis Jourdan were also French.

"Caron leads the cast in a contest to see who can be the most French." (TV Guide)

"No doubt inspired by the finicky claustrophobic sets and bric-a-brac, the cast tries (with unfortunate success) to be more French than the French." (Time Out New York) 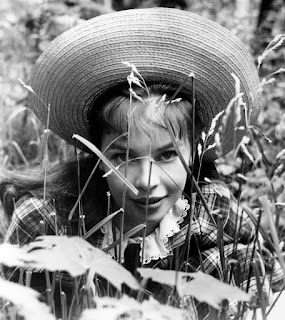 Gigi is a young tomboy of a girl living in Paris around the turn of the century. She is being raised by her grandmother and eccentric Aunt Alicia to become a sophisticated courtesan to the men of elite Parisian society. Chevalier is an ageing boulevardier who, as the semi-detatched narrator, sings nonchalantly of the romantic tendencies of those around him. Her mentors are overjoyed when Gigi catches the eye of the young, wealthy playboy, Gaston, but surprised when he falls in love with her and proposes. Gigi, who always resisted the life of a glorified hooker, could not be more thrilled.

Leslie Caron (Gigi)
Caron was producer Arthur Freed's first choice for Gigi, but he had to enlist the help of his friend Fred Astaire, with whom she had made DADDY LONG LEGS (1955), to recommend her for the part in the film. Caron's film debut had been with Gene Kelly in the monumental success AN AMERICAN IN PARIS (1951). She had performed the role of Gigi in London's West End without much success so she was hesitant to do the film. But after reading Lerner's revisions to the script and the songs that would accompany it, she agreed to take the part.

Maurice Chevalier (Honoré Lachaille)
A couple of Chevalier's trademark songs come from GIGI: "Thank Heaven For Little Girls" (video below), and "I Remember It Well." He accepted the role immediately after hearing some of Lerner and Loewe's songs for the picture. An offhand comment he made while filming about his preferring to perform in cabaret than to chase women inspired the song "I'm Glad I'm Not Young Anymore."

"I am too old for women, too old for that extra glass of wine, too old for sports. All I have left is the audience, but I have found it quite enough."

"The dominating creative contribution comes from Minnelli and Cecil Beaton ... The combination of these two visual elitists is really too much - it's like a meal consisting of cheesecake, and one quickly longs for something solid and vulgar to weigh things down." (Time Out New York)

"Overbaked but enjoyable, and a banquet for the eyes, thanks to the visual wonder of the Minnelli-Beaton teaming." (TV Guide)

Having worked with Cecil Beaton on "My Fair Lady," Alan Jay Lerner insisted on recruiting him for GIGI. Beaton had to provide 150 spectacular costumes for the scenes in the Bois de Bologne and 20 for the scene at Maxim's. The filming of this scene on location in Paris provided some technical difficulties due to the famous mirrored walls of the restaurant. Minnelli, refusing to cover up the mirrors for the sake of filming, developed a way of putting suction cups on the photo flood lights. However, Lerner was ultimately unsatisfied with the finished product and insisted on refilming the entire scene on a sound stage back in California. This made it considerably easier for Beaton to acquire the vast number of costumes he needed from the studio warehouses.

Alan Jay Lerner (screenwriter and lyricist) and Frederick Loewe (composer)
Although Loewe despised working in Hollywood, Lerner was able to convince him to come aboard by assuring him that much of the filming would be done on location in Paris. Producer Arthur Freed enlisted Lerner to adapt the screenplay for GIGI while he was still working with "My Fair Lady" and Lerner saw it as the perfect piece to fulfil his contract at MGM. When the song "Say A Prayer For Me Tonight" was rejected for "My Fair Lady" (much to the chagrin of Julie Andrews), the team decided to use is for GIGI. The two productions are similar in many ways, an observation that I share with critic Bosley Crowther:

"[GIGI is] a musical film that bears such resemblance to "My Fair Lady" that the authors may want to sue themselves."

Margaret's Rating
I give GIGI a 7/10. It is without a doubt one of the most visually stunning musicals of the 1950s. Maurice Chevalier gives an absolute gem of a performance. Some of the songs written by Lerner and Loewe are especially catchy. But I must say I was not thrilled by the subject matter of the picture. GIGI is pushed and prodded hither and thither by the various other characters in the film, rarely making any sort of decision for herself. I like her, but I have trouble respecting her because her attitude to life is a bit pre-teen. While the film is a very flashy spectacle, it lacks depth and purpose. I also could not help comparing it to the all-too-similar MY FAIR LADY (1964) and concluding that the latter is much more to my liking. Rotten Tomatoes gives an accurate assessment of the film when they give it a solid 74% and say:

"It may not be one of Minnelli's best, but the charming and flawlessly acted GIGI still offers enough visual and musical treats to satisfy."

GIGI is on TCM tonight, Saturday, at 10:00 pm EST, so if you happen to catch it, I would love to know what you think of this cinematic masterpiece.