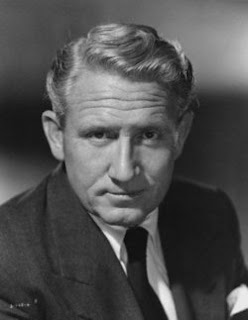 Although Spencer Tracy was Katharine Hepburn's lover for about 25 years, I am ashamed to say that I know very little about the man, except of course what I have read in Hepburn biographies. I know he was of Irish descent, and like most Irishmen he drank too much and had a serious chip on his shoulder about life. But I do honestly believe that Spencer Tracy was one of the greatest actors of all time, and I didn't need to read that in a book.

Spencer Bonaventure Tracy of Milwaukee, Wisconsin was nominated for the Academy Award for best actor nine times, two of which he won. On October 15 (this coming Monday), Turner Classic Movies will show six of Tracy Oscar-nominated films. Six of the nine films Tracy made with Katharine Hepburn will be aired on Monday, October 22, followed by the documentary, "The Spencer Tracy Legacy," hosted/narrated by Hepburn. This past Monday, October 8, TCM showed three of my favorite Spencer Tracy films from his early years as an actor.


LIBELED LADY (1936) [comedy, romance]
Directed by: Jack Conway
Starring: William Powell, Myrna Loy, and Jean Harlow
Runtime: 98 minutes
Synopsis: Newspaper editor in chief Warren Haggerty (Tracy) plays twisted cupid for the sake of journalism. When society belle Connie Allenbury (Loy) threatens to sue the newspaper for accusing her as a marriage-breaker, Haggerty employs his playboy friend Bill Chandler (Powell) to trap Allenbury in an elaborate set-up. Everything comes unstuck when Chandler and Allenbury actually fall in love and Haggerty must face pressures from his own girl (Harlow) to tie the knot.

Chandler: "I thought that was rather clever of me."
Allenbury: "Yes, I thought you thought so."

Harvey: "What'll we use as a headline?"
Haggerty: "I don't care. Anything. 'War threatens Europe.'"
Harvey: "Which country?"
Haggerty: "Flip a nickel!"

TEST PILOT (1938) [drama, romance]
Directed by: Victor Fleming
Starring: Clark Gable, Myrna Loy, Lionel Barrymore, Marjorie Main
Runtime: 119 minutes
Synopsis: Daredevil test pilot and ladies' man Jim (Gable) falls in love with Ann (Loy) when he crash lands on her family's farm in Kansas. The two marry almost immediately, much to the chagrin of Jim's co-pilot and best friend Gunner (Tracy), who is all too aware of the perils of being attached to someone who dices with death for a living. Ann soon learns that life with a test pilot is anything but peaches and cream and Jim must re-examine his priorities now that he has someone besides himself to think about.

Clark Gable and Spencer Tracy made three movies together: SAN FRANSISCO (1936), TEST PILOT (1938), and BOOM TOWN (1940). The two supposedly stopped working together when Tracy demanded that he be given equal billing. Gable gives an honest performance as the death-defying pilot. Myrna Loy is super-adorable, as usual, though I find it hard to believe she could ever actually be from Kansas (although she is actually from Montana). She has a very juicy part with some great lines. Tracy's character, unfortunately, is a bit of a mope - I don't think he smiled once through the whole film! But it is a good flick with some great flying scenes and a lot of heart.

DR. JEKYLL AND MR. HYDE (1941) [drama, horror, sci-fi]
Directed by: Victor Fleming
Starring: Ingrid Bergman, Lana Turner, Donald Crisp
Runtime: 113 minutes
Synopsis: In many respects this version of Robert Louis Stevenson's classic is more based on its 1931 film predecessor than on the original novel. Although critics panned the movie, and Tracy himself was unsatisfied with his performance, I think it is a good addition to any Halloween film collection. Apparently, Tracy wanted Katharine Hepburn, whom he had not yet met, to play both Bergman and Turner's roles. Tracy had ironically turned down the opportunity to star with Hepburn in THE PHILADELPHIA STORY (1940) in order to make DR. JEKYLL AND MR. HYDE. Not to worry - they would get together in 1942 to make WOMAN OF THE YEAR and their professional and personal union would be well underway.