Louise Beavers, What A Character! 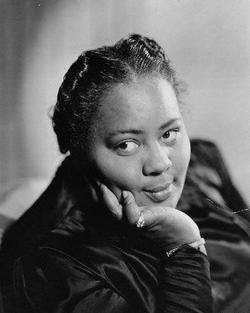 This post is written in conjunction with the What A Character! blogathon hosted by Once Upon a Screen, Outspoken and Freckled, and Paula's Cinema Club.

Louise Beavers' career as one of the best character actresses of classic Hollywood spanned from 1927-1960. She is unfortunately best known for playing the quintessential African American house servant, playing characters who were literally named "Mammy" or "Mamie" nine times, and countless other Cleos, Gussies, and Berthas. Although Beavers often played the mammy role on screen, she resisted being defined by the characters she played:

“Beavers responded to her marginalization by negotiating her screen representations. Recognizing that screen roles available to African American women (mulatto or not) were limited, she used her histrionic talent to elevate her roles to a level of unquestionable dignity. Although she represented the quintessential “Mammy” on screen, in her private life she was not the subservient figure her screen roles signified.” (Charlene Regester, 72)

In fact, Beavers detested cooking and never had children of her own. Born in Ohio and raised in Pasadena, California, she had to learn how to talk like she was from the South. The daughter of a school teacher, Beavers sang in her high school choir, and eventually became a member of the Sigma Gamma Rho sorority, one of four historically African American sororities. Beavers had her first taste of show business as a member of the Lady Minstrels, who performed amateur productions on the Vaudeville circuit, and then as personal made to silent screen star Leatrice Joy. In 1927 Beavers landed her first role in a motion picture - UNCLE TOM'S CABIN.

“In all the pictures I had seen… they never used colored people for anything except savages – and I had no ambition to appear before the public in a G-string and an African smile. The costume seemed a little bit too sketchy for general use.” (Louse Beavers in Regester, 74) 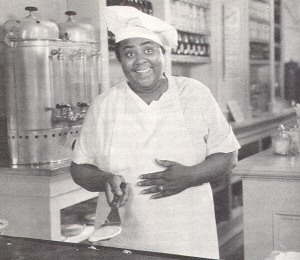 The role that won Louse Beavers respect as a legitimate actress was Delilah Johnson in IMITATION OF LIFE (1934), starring Claudette Colbert, Ned Sparks, and Fredi Washington. When working single mother Bea allows Delilah and her daughter Peola move in for exchange for food and lodging, the two women become friends. Bea has taken over her husband's maple syrup business, and when she discovers Delilah has a special secret pancake recipe, she sees a business opportunity. The two women open a pancake restaurant, and when a slick city businessman (Ned Sparks) suggests that they box the pancake mix, the two women make a fortune. Delilah's daughter, Peola, has very light skin, and she struggles throughout the story to find her place in the world. Bea's daughter Jessie also has her own cross to bear when she unintentionally falls in love with her mother's fiance. Both families trust in their love for each other to see them through the good times and the bad.

The film is significant for a number of reasons. On the one hand, IMITATION OF LIFE conformed to most racial stereotypes of its day. Delilah is never seen out of the servile role. Even when she has made enough money to leave service, she insists on staying on to take care of Bea. Also, the business that has earned Bea and Delilah success is mostly due to Delilah. The special secret pancake recipe was hers. She is the face on all the signs and packages. She is the one literally flipping the pancakes on the griddle. Yet it is Bea who runs the business and controls the money. Mammy inflicts racial inequalities on herself, while  simultaneously recognising them as unjust. When young Peola runs in crying after Jessie innocently identified her as "black":
Peola: "I'm not black! I'm not black! I won't be black!"
Bea to Jessie: "How could you say such a mean cruel thing to Peola?"
Jessie: "I didn't mean anything."
Delilah: "It ain't her fault, Miss Bea. It ain't yours and it ain't mine. [To camera] I don't rightly know where the blame lies. It can't be our Lord's. It's got me puzzled." 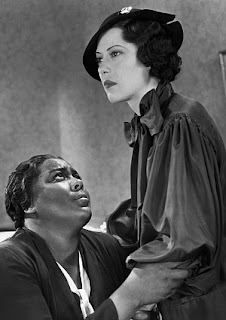 Then later, Delilah tries to console an unhappy, unsatisfied teen-age Peola:
Peola: "Don't say 'Mammy.'"
Delilah: "Look here, baby, you go down South to one of them high-toned colleges where only the high-toned goes. Wouldn’t you do that for me, honey?"
Peola: "A Negro school?"
Delilah: "Ain’t nothing to be ashamed of, daughter dear. Meet your cross halfway. It won’t be near so heavy. Go amongst your own. Quit battling! Your little head’s sore now from butting against stone walls. Open up and say, “Lord, I bows my head.” He made you black, honey. Don’t be telling him his business. Accept it, honey. Do that for your mammy, your mother, dear." [starts humming Negro spiritual]

This contradictory stance is fairly typical of Hollywood's position about racial inequality. Sidney Poitier would run up against many of the same problems in his career, although the changing times, and his gender, permitted a certain amount of progression from Beavers' Mammy in IMITATION OF LIFE.

On the other hand, Beavers' performance progressive in that she was given almost as much screen time as Colbert. Also, for the first time, the problems of an African American working mother were shown to be as equally important as a white working mother. The problem of racial equality was directly addressed, though not resolved, within the space of the movie. The concerns of working women were central to the plot, and the contrast between the two situations, and how the women support each other to negotiate their problems, projects a very early positive, harmonious model of inter-racial cooperation. 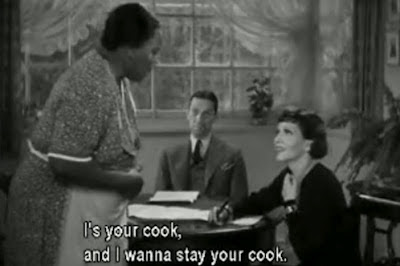 There are a lot more things that could be said about IMITATION OF LIFE, but I think I'll leave it there for now. It is certainly not the only film in which Louise Beavers gives an outstanding performance, though it is definitely one of her best. Over her career, Beavers would support some of the best leading actors and actresses of the day, including Myrna Loy, Mae West (the two became close friends), Mary Pickford, Constance Bennet, and Jean Harlow, Cary Grant, Bing Crosby, and William Powell. In 1952 she took over the role of "Beulah", the first sitcom to feature an African American as the primary character, from Ethel Waters. Louise Beavers made more than 150 films in her long career, passing away in 1962.